National HIV Testing Week (NHTW) promotes HIV testing to gay and bisexual men and black African men and women. These groups make up seven out of 10 people in the UK living with HIV.
The week is co-ordinated by HIV Prevention England (HPE) with support and participation from organisations in the public, statutory and private sectors, and promotes the benefits of regular testing and treatment for both the individual and community.
It raises awareness of the importance of HIV testing, as well as increasing opportunities to test – be it in clinical settings, in primary care, through community-based rapid testing or via postal testing. The ultimate goal is to increase regular HIV testing in the most affected groups. 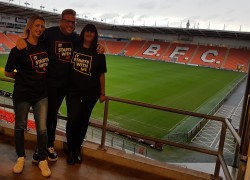 Renaissance, as a local activation partner for the event, are heavily involved with raising awareness across the county as well as offering FREE and confidential HIV testing in community and social settings with fast track support from HIV nursing teams in your area, in the event of a reactive result.

HIV testing is always available from your local Sexual Health Clinic or GUM.

Below you will find information for what is going on in Blackpool, including pop up testing events. Drop in clinics and information stations.

There will be pop up stalls at Blackpool and the Fylde College Bispham Campus and University Centre throughout the week. 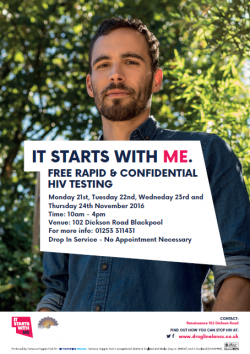